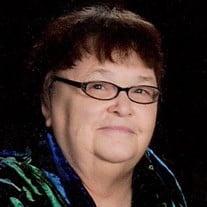 A memorial service will be Saturday, February 8, 2020 at 10:30 am at the Lexington United Methodist Church.

Janet Ireida Wright was born September 8, 1945 in Bremmerton, Washington, the daughter of Andy M. and Carmetta L. (Hope) Fuller. She attended Union High School in Gladstone, Illinois and earned her Associates Degree in Muscatine. Jan married Douglas McConohy on July 6, 1964; they divorced in 1976 and he passed away in August 2016. She married Richard Wright on April 14, 1980; they divorced in 1994 and he passed away in July 2000.
She owned and operated J & D refrigeration for many years. She worked for Spring Brook Country Club and was the Bar Manager for the American Legion for several years.
Jan was an avid reader, loved spending time with her grandchildren and great grandchildren, she was the head of the Lexington Food Pantry for 8 years and was member of the United Methodist Church in Lexington, Missouri.
She is survived by her three children: Andrew McConohy of Muldrow, Oklahoma, Aimi “Amy” (Aaron) McConohy-Nelson of Clinton and Cody (Brittany) Wright of St. Charles, Missouri; 11 grandchildren: Mark, Kolby, and Elizabeth McConohy, Hope (Lance) Hull, Garrett (Alicia) Clark, Shae-Fuller Clark, Trey (Shyanne) Haynes, Mitchell Mohr, and Lucas, Landon and Lia Wright; 9 great grandchildren; five siblings: David (Barb) Carey of Washington, Missouri, Steve (Charlene) Carey of New Boston, Illinois, Steven Fuller of Lexington, Missouri, Penny Dierckx of New Boston, Illinois and Kevin Fuller of Clinton; and two lifelong friends: Joyce Jones of Oquawaka, Illinois and Sharon Miller of Camanche.
She was preceded in death by her parents and daughter Christine McConohy in March of 1996.
Memorial may be made to Lexington United Methodist Church, Lexington Food Pantry or Church of the Open Door Food Pantry.


To order memorial trees or send flowers to the family in memory of Jan Wright, please visit our flower store.