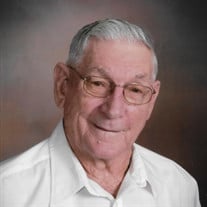 Friends may call from 1:00 PM to 2:00 PM, Sunday, January 17, 2021 at Ralph O. Jones Funeral Home, 306 S. 2nd Street, Odessa, MO, 64076, 816-633-5524. Family will not be present. MASKS ARE REQUIRED TO ENTER THE BUILDING. A private family graveside service will be held Tuesday, January 19, 2021 at the Missouri State Veterans Cemetery, Higginsville, MO. Memorials are suggested to the First United Methodist Church building fund, trustees fund or the Odessa Community Service Center. Memories of Jim and condolences for his family may be left at www.LedfordFamilyFH.com or on our Facebook Page.

Jim was born on August 10, 1926 to Clarence M. Stoll, Sr. and Ethel (Carl) Stoll in Mayview, MO. Jim was a Veteran of the United States Army and served in World War II where he earned the American Theater Service Medal and the Victory Medal. On November 13, 1951 Jim was united in marriage to Edith Faye Lammers in Kearney, Nebraska. Jim became a member of Wallace Chapel Church in 1972; he then transferred his membership to the First United Methodist Church in Odessa in 1988. Jim served as a trustee for the church and enjoyed volunteering. Jim retired after 38 years from Jack Cooper Transport Co. in Kansas City, MO. He was a member of the Teamsters Retiree Club, Local 41. Jim was a past Odessa City Alderman and spent many years volunteering, bell ringing, and doing community service. In addition to spending time with family and friends, Jim enjoyed making Wahoo Boards, doing word search books, and crushing aluminum cans.

Jim was preceded in death by his parents; and a brother, Vernon Stoll.


To order memorial trees or send flowers to the family in memory of James Aubrey Stoll, please visit our flower store.