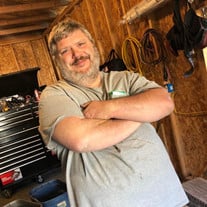 There will be a celebration of life at the Henrietta City Hall on Saturday, January 15, 2022 at 1:30 pm. A pot luck dinner will follow. Memorials are suggested to the family in care of Birgitt Lane. Memories and condolences may be left at www.LedfordFamilyFH.com. Arrangements have been entrusted to Walker-Nadler-Fuller Funeral Home, 1720 South Street, Lexington, MO 64067, 660-259-2245.

Boo was born on October 27, 1970, in Ft. Polk, Louisiana to James and Sharron (Danner) Lane. He graduated from Orrick High School. Boo served in the US Army for 2 years. While serving his country in Germany during Desert Storm, Boo met the love of his life, Birgitt Meister there and was later united in marriage on December 15, 1990, in Bell, FL. Boo worked as a truck driver for various companies. Boo will be remembered for playing pool and darts, eating his favorite foods, riding his motorcycle but above all his big heart and being the life of the party. His love for his grandchildren was unconditional.


To order memorial trees or send flowers to the family in memory of James Shannon Lane, please visit our flower store.