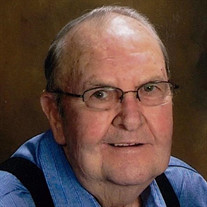 James “Jim” Ash Emison, 84 of Independence, Missouri formerly of Wellington, Missouri passed away January 11, 2019 at his home. Funeral services will be Tuesday, January 15, 2019 at 11:30 am at the Ralph O. Jones Funeral Home, 306 south Second Street, Odessa, Missouri, 816-633-5524. Visitation will also be on Tuesday at the funeral home from 10:00 am until 11:30 am. Burial will be at Greenton Cemetery, Odessa, Missouri. Memorials may be made to the Kids First Education Foundation of Wellington-Napoleon.

Jim was born September 17, 1934 in Wellington, Missouri to James Ash and Melba (VanMeter) Emison. He graduated from Wellington High School in 1953. He married Patricia Joan Crowson on December 11, 1983. Jim was a crop and dairy farmer. The Emison family had one of the first grade-A dairy farms in Lafayette County which spanned three generations. He was a member of the Wellington United Methodist Church.


To order memorial trees or send flowers to the family in memory of James "Jim" Ash Emison, please visit our flower store.