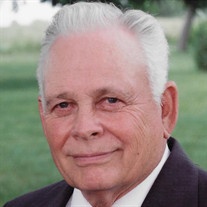 Born October 26, 1922, in Excelsior Springs, he was the son of Morgan Avander and Pansy (Collis Sperry) Craven. On February 24, 1946, he married Jessie Louise Kinnaman in Independence. An Army veteran of World War II, he served from January 5, 1942, to January 29, 1946, with the 739th Anti-Aircraft Artillery Gun Battalion in the South Pacific Theater where he was stationed in New Guinea and Negros, Panay, Mindanao, and Luzon, the Philippines.

He and his family moved to Odessa in 1957 where he farmed. He retired after 35 years as a dispatcher from the Independence Gas Service Company. He was ordained to the priesthood in the Reorganized Church of Jesus Christ of Latter-Day Saints in 1971 and was a current member of the Odessa Restoration Branch.

In addition to his parents, Frank was preceded in death by a brother Gerald Hugo Craven.


To order memorial trees or send flowers to the family in memory of James Frank Craven, please visit our flower store.