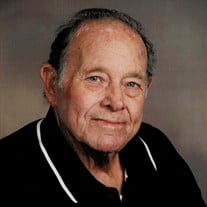 Jackie Orville Gann of Odessa Missouri, 85, passed away on May 18, 2022 at Centerpoint Medical Center in Independence, Mo. With family at his side, Jack bravely declared victory over an ICU that could hold him no more.
Visitation will be at Ralph O. Jones Funeral Home in Odessa on May 31, 2022. Visitation will be held from 5:00-7:00pm and a brief service will be held immediately after. Private burial at a later date. In lieu of flowers, donations are gratefully accepted to purchase a gift for the Odessa Senior Center where Jack enjoyed many meals and made many friends.
Jack was born to Orville and Marie Gann on December 27, 1936 at the family farm southwest of Odessa. Jack was the middle child of three, along with older sister Joan and younger brother Ronald of Odessa, Mo. Early years found Joan and Jack walking together to Saylor school about a mile from the Gann farm until 1946 when the schools were consolidated.
After graduating Odessa High School in the class of 1954, Jack began his work life with a brief year at Odessa’s Town and Country Shoes. September of 1955 began what would eventually become a 37 year career. A job with Bendix Aerospace, a division of Allied Signal in Kansas City, lasted a year and half. Back to Odessa for his next job with Aladdin Manufacturing where Jack picked up his welding skills. In April of 1957, he returned to Bendix. Briefly interrupted by military service, Jack rose to the job of inspector and worked for Bendix until retirement in 1992.
In October of 1959, Jack joined the Air Force Reserves, serving as an aircraft mechanic. He learned the skill by training at the Lackland Air Force Base in Texas with the 3762nd school squadron. He married Connie Dyson in 1961 and they welcomed son Terry in 1962. Jack was called into active duty in 1961 during the Cuban missile crisis. Deployed on the Azores Islands, Jack often reminisced about watching the bullfights.
Jack built the homes he lived in. He designed his first Odessa home himself on a blank sheet of graph paper. This home on 2nd St Terr was later sold to a church for use as its parsonage. Details included an open upstairs floor plan and a waterfall pond integrated into a natural stone patio. His second home was a major remodel and additions to a farm home at Mount Hope Rd. and Varner Rd. The third was a house on Woodlawn that he designed, built and soon sold. The fourth property was on Ozark Short Line and included his welded spiral staircase. During the construction of this home, Jack fell off of a ladder onto the concrete basement floor, resulting in a plate and five screws in his shoulder. He learned to swing a hammer with his left hand and finished the job.
Jack made much of the furniture in those homes. He was an expert woodworker and was especially skilled with a lathe. He built outdoor furniture, chests, decorative boxes, wagons, canes, a rolltop desk, customizations to his trucks, and much more.
Likely inspired by his father Orville’s fiddle playing, Jack enjoyed live music and playing the guitar throughout his life. As a teenager, he famously wired his guitar into his car radio and friends would gather around for fun parking lot jams.
Jack was always looking for creative ways to make a little extra on the side. A one-man residential trash service, a July fireworks stand at the south edge of town, and cutting and selling firewood from his twenty-acre woodland property west of Odessa are just a few of his side projects. His creative welding skills were expressed in practical ways and he built many a trailer and stock rack. Later he created unique bicycles with head-turning designs, welded from repurposed bikes. Selling and servicing out of his garage, he became known as Odessa’s Bike Man. Many an Odessa kid pedaled happily away from Jack’s garage on a fresh bike.
In Jack’s early years, he was a member of the Odessa Jaycees. He is also a member of the Odessa First Baptist Church. After retiring from Bendix in 1992, Jack soon started spending the cold months down south. He maintained a vacation place at Palm Shadows resort community in Donna, Texas. There he made new friends and became a fan of shuffleboard and bocce ball. Through the many winter seasons down south he never forgot family and friends. Later in life he enjoyed the community at the Odessa Senior Center where he counted money for daily operations, played cards, and loved to watch live music.
Jack was preceded in death by his parents, Orville and Marie Gann, and sister Joan. Jack is survived by his brother Ronald and his wife Pat and their family, of Odessa, son Terry and his wife Angeline, of Overland Park, Ks, grandchild Jack and step-grandchild A.J.
Jack was a lifelong son of Odessa and the surrounding area. He will be missed by many.


To order memorial trees or send flowers to the family in memory of Jackie "Jack" Orville Gann, please visit our flower store.