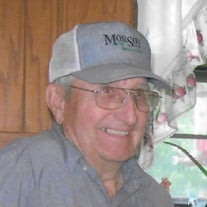 Jack Donald Tunnell, 94 of Odessa, Missouri passed away on Friday, January 7, 2022, at home surrounded by family.

A graveside service with Military Honors will be held at 12:00 p.m., on Tuesday, January 11, 2022, at the Odessa Cemetery, in Odessa, MO. Interment will follow at the cemetery. Memorials are suggested to the Odessa High School FFA Program and may be dropped off or mailed to the funeral home. Memoires of Jack and condolences for his family may be left at www.LedfordFamilyFH.com or on our Facebook Page. Arrangements have been entrusted to the Ralph O. Jones Funeral Home, 306 S. 2nd St., Odessa, MO, 64076, 816-633-5524.

Jack was born on September 27, 1927, in the Township of Columbus, MO to Joseph “Cort” Tunnell and Una “Irene” (Decker) Tunnell. He served in the United States Navy until being Honorably Discharged. Jack earned the Victory Medal while in the Navy. On September 4, 1949, Jack married Mary Anne Barker in Warrensburg, MO. She preceded him in death on July 9, 2018. Jack was a lifelong farmer, farming crops, cattle, hogs, and dairy cows.

In addition to his parents and wife, Jack was preceded in death by three sisters, Betty Page, Beverly Milligan, and Mary Weatherman; and one brother, Robert “Bob” Tunnell.


To order memorial trees or send flowers to the family in memory of Jack Donald Tunnell, please visit our flower store.