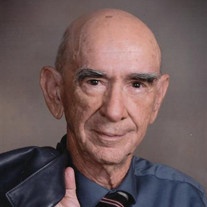 Reverend Hudson was born on September 1, 1928 in Nelson County, Virginia to Herman Joy Hudson, Sr. and Emily (Whitehead) Hudson. He graduated in 1949 from Fleetwood High School in Nelson County, Virginia. On November 5, 1951 Herman enlisted in the United States Air Force and served in the Korean War. He earned the National Defense Service Medal, United Nations Service Medal, Korean Service Medal and the Good Conduct Medal. On November 4, 1955 he was Honorably Discharged. On April 12, 1957 Herman was united in marriage to Margaret Anne (Bowland) Hudson in Knob Noster, MO. She preceded him in death on October 22, 2012. After marrying Anne, Herman earned his Bachelor’s Degree from Central Missouri State College in Warrensburg and then received his Masters of Divinity Degree from St. Paul’s School of Theology in Kansas City, MO. Herman was a member of the First United Methodist Church in Odessa. He served as a Minister for over 60 years in Odessa, Sedalia, Napoleon, Kansas City, Chillicothe and many other communities. In addition to spending time with his family and friends, Herman was a lover of classical music and an avid reader.

In addition to his parents and wife, Herman was preceded in death by a grandson, John Daniel Hudson and a sister, Nancy Harris.


To order memorial trees or send flowers to the family in memory of Herman J. Hudson, Jr., please visit our flower store.