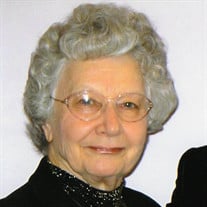 Funeral services will be at 10:00 a.m. Thursday, October 3, 2019 at Mt. Tabor United Methodist Church, 12507 Mt. Tabor Road, Odessa, Missouri. Interment will follow at the Mt. Tabor Cemetery. Family will receive friends from 6:00-8:00 p.m. on Wednesday, October 2, 2019 at the Ralph O. Jones Funeral Home, 306 S. 2nd St., Odessa, MO, 64076, 816-633-5524. Memorials contributions may be made to Mt. Tabor United Methodist Church or Warrensburg Senior Center. Memories of Helen and condolences for her family may be left at www.LedfordFamilyFH.com or on our Facebook Page.

Helen was born February 21, 1932, daughter of Joseph M and Ruby V. (Dillon) Clark in Knob Noster, Missouri. She was a graduate of Warrensburg High School Class of 1951. Helen was a resident to the Columbus Community for 65 ears except for two years when her husband was in the army stationed at
Ft Hood, Texas.

Helen was united in marriage to Richard S. Ring on April 5, 1953 in Warrensburg, Missouri. She was a member of the Mt. Tabor United Methodist Church and Mt. Tabor UMW. Helen played a very active part of the Johnson County Pork Producers and the Johnson County Fair Association. Helen and Richard were the envy of many, roller skating in their younger years and skated at several of their grandchildren’s birthday skating parties They enjoyed square dancing and were members of the Holden On’s and the Bee Square Dance Clubs. Helen also excelled in ceramics and was very good cook and cooked for many a hay crew over the years.


To order memorial trees or send flowers to the family in memory of Helen Louise (Clark) Ring, please visit our flower store.