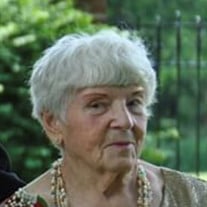 Hazel I. Williams-Mammen was born September 17, 1925 in Lincoln, Nebraska to Daniel Wesley Martin and Mary Lee Acton-Martin. She was the oldest of eight children, (herself, Audrey, Harold, Thomas, June, Jenny, Lela and Rachel). She grew up in rural Ashland on a small plot of land in a small creek valley. Her favorite memories there were the cliff lined hills covered with wild columbine flowers and the old swimming hole. Growing up in the great depression and the dust bowl, times were obviously not always easy, however, a fond memory Hazel held onto was her mother making wild plum jelly and homemade bread.

Determined to be educated, nothing was going to stop her. She walked through fields of snow and had to cross two creeks to make it to the one room schoolhouse where she even sat on a log because there were not enough seats. Even though she was not an outgoing student she excelled well in school, even completing two grades in one year. While going to school one day, Hazel tragically fell out of the wagon and sustained a major injury and with extensive medical treatment and grit she learned how to walk again. After graduating the one room school she attended and graduated from Ashland High School.

When she graduated from high school she took her first apartment with a friend and worked in a hardware store scooping up nails where she made $11 a week (to pay for rent, food and incidentals). Whenever the opportunity arose she would fill in at the candy or cosmetic counter, which would increase the money that she made. She also worked at a commercial laundry service where she pressed pillow cases, sheets and towels. Despite working she decided she wanted to continue her formal education by attending a secretarial training school in downtown Columbia, Missouri for young women, where she learned shorthand and dictation skills. While working at the hardware store she met who would be her first husband, Edward Dennis Williams. They were married May 26, 1951.

She met and married her second husband, Henry Joe Mammen, September 19, 1999 and moved to Butler, Missouri were she lived on the farm with her husband. At that time she purchased one of the oldest standing homes from the Civil War and opened a B and B. She attended Saint Matthews Lutheran Church. She lived in Butler until her husband passed June 1, 2014. She relocated back to Lexington, Missouri to be close to her family. When attending church, she attended the First Baptist Church in Higginsville, Missouri.

During her life she developed many interests, such as, gardening, cooking, antique collecting, jewelry making, quilting and was an amateur writer. In her life she had four children, Carl Martin, Mary Hentges (husband Jim), David Williams (wife Cindy), and Donna Slusher (husband Lee) whom she loved dearly. She had a plethora of grandchildren and great grandchildren whom she also adored and loved.
These were the stories that Hazel wanted shared with everyone.

There will be a private family service and burial at Lexington Memory Gardens Cemetery. Memorials may be made to the Knights of Coulmbus Coats for Kids or Preferred Hospice and left in the care of the funeral home. Memories and condolences may be left at www.LedfordFamilyFH.com. Arrangements have been entrusted to Walker-Nadler-Fuller Funeral Home, 1720 South Street, Lexington, Missouri, 64067, 660-259-2245.


To order memorial trees or send flowers to the family in memory of Hazel Williams-Mamman, please visit our flower store.