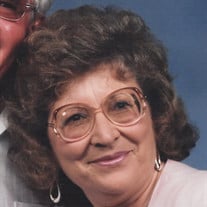 Hazel Lorene (Hinds) Fisher, 82, of Odessa passed away July 12, 2020 at Villages of Jackson Creek Nursing Home, Independence. Visitation will be Friday, July 17, 2020 from 12:00 until 1:00 pm at the Ralph O. Jones Funeral Home, 306 South Second Street, Odessa, MO 64067 816-633-5524. A funeral service will also be on Friday at the funeral Home at 1:00 pm. Memorials may be made to the charity of the donor’s choice. Burial will be in Odessa Cemetery. Memories and condolences may be left at www.LedfordFamilyFH.com.

Hazel was born April 9, 1938 to Elijah Homer and Lois Clella (Edmonds) Hinds in Bennington, Oklahoma . She graduated from Fairview High School and then married Ralph Herman Fisher on September 21, 1957 in Independence. She worked for Montgomery Ward’s, General Electric and retired from Commerce Bank. Hazel enjoyed spending time with her family and friends and working outside.

Hazel is survived by her step children, Deborah Lynn Ollison and husband John of Independence and Susan Smith of Independence; her sister, Opal Nance of California; and her nephew, Donald Fisher and wife Teresa of Independence; and many step grandchildren and nieces and nephews. She was preceded in death by her parents; her husband; step son Butch Fisher; and her brother and sisters.


To order memorial trees or send flowers to the family in memory of Hazel Lorene Fisher, please visit our flower store.