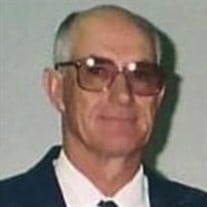 Glenn was born on March 22, 1935 in Dunn Center, North Dakota to Leonard and Cora (Adams) Eggert. He was a 1953 graduate of Odessa High School. Glenn served three years in the United States Army and worked for the United States Postal Service for 28 years. On October 29, 1955 he was united in marriage to Betty Lou Duncan in Lee’s Summit, Missouri. He was a member of the Odessa Restoration Branch and served on the Board of Directors for the Odessa Senior Center. Glenn was an avid Odessa Bulldogs fan and refereed many high school volleyball games. In addition to spending time with family and friends, Glenn enjoyed scrapping metal. He loved farming and running cattle on the Odessa family homestead.

In addition to his parents, Glenn was preceded in death by one great granddaughter, Cora Padilla; one brother, Earl Eggert; and two sisters, Myrtle Dillon and Betty O’Dell.


To order memorial trees or send flowers to the family in memory of Glenn Delbert Eggert, please visit our flower store.