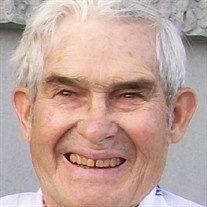 Glen Earl Swaim, 89 of Odessa, Missouri passed away on Wednesday, October 10, 2018 at The Parkway Senior Living in Blue Springs, MO surrounded by family.

Glen was born on July 21, 1929 in Hale, MO to Clyde and Cora (Humphreys) Swaim. He graduated from Hale High School in 1947. After high school he enlisted in the United States Navy and served from September 7, 1950 to July 2, 1954. During that time he served in the Korean War and earned the National Defense Service Medal, Good Conduct Medal and Navy Occupation Service Medal with European Clasp. On November 7, 1953 he married Helen (Lavigne) Swaim, and she passed on December 6, 1999. On April 14, 2003 Glen married Beulah (LaBlanc) Thibodeaux and she passed on November 2, 2014. He retired from the US Post Office in Independence, MO after 26 years as a Building Engineer. Glen was a Lifetime Member of the Odessa VFW Post 5675, American Legion and the Tin Can Sailor. He enjoyed spending time with his family and friends.

In addition to his parents and wives, Glen was preceded in death by a son Dennis Lee Swaim and two brothers, Louis and Bill Swaim.


To order memorial trees or send flowers to the family in memory of Glen Earl Swaim, please visit our flower store.