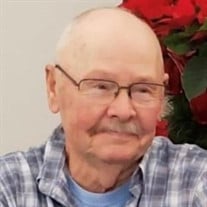 George was born on June 12, 1944, to James Farmer and Frances Marie (Varner) DeLay in Kansas City, MO. He graduated from Odessa High School in 1962. On June 1, 1968, George was united in marriage to Sylvia “Susie” Ann Russell in Independence, MO. He served in the United States Army National Guard. George worked on the Grounds Crew for the Kansas City A’s and the Kansas City Chiefs in the early 60’s. He then managed Meyer Lumber in Odessa. Later he retired from Concordia Lumber as a lumber sales representative after 22 years. He was a member of the Calvary Baptist Church. In addition to spending time with family and friends, he enjoyed camping in Branson, piddling outdoors, and was an avid NASCAR and sports fan.

Survivors include his wife, Sylvia, of the home; two daughters Teresa DeLay and Kimberly Williams (Greg) both of Odessa, MO; three grandchildren, Kelsey, Kamryn, and Abigail Williams all of Odessa, MO; a brother, Ron DeLay of Odessa, MO; and many relatives and friends.

George was preceded in death by his parents.


To order memorial trees or send flowers to the family in memory of George LeRoy DeLay, please visit our flower store.