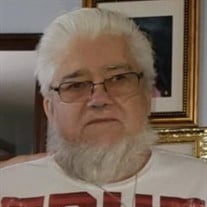 George was born on September 29, 1948, in Independence, MO to Archie Ball and Seeta Joyce (Williams) Faulkner. On June 21, 1968, he married Candace L. Upham in Independence, MO. George owned and operated Faulkner & Son Trucking from 1991 to 2003. He then went on to drive for Chism & Sons Trucking and retired in 2012. George was a member of the Missouri Dump Truckers Association. In addition to spending time with family, George enjoyed hunting, fishing, motorcycles and being with his grandchildren.

In addition to his father, Archie Ball Faulkner; George was preceded in death by his mother and stepfather, Seeta and Alex Coffee; two sisters, Avis Watkins and Sharyn Vanderpool.


To order memorial trees or send flowers to the family in memory of George "Cowboy" Garilee Faulkner, please visit our flower store.