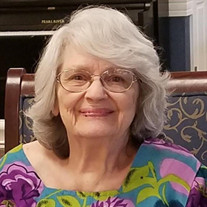 Geneen was born, in San Francisco, CA, daughter of James and Gladys WALTON, Jan 11, 1936. She attended Vallejo High School, in Vallejo, CA, but could not complete her senior year after marrying a young soldier, William Donald “Don” LANGEN, on Aug 16, 1953, in Vallejo. After Don’s discharge in 1957, they lived in southern California for many years where they raised four sons. While living in Simi Valley, she completed her education, and in 1969 she received her high school diploma. In 1977 they moved to Stevenson, WA, and when Don retired in 1995, they moved to Fernley, NV. They were married 46 years when Don passed away in 1999. In 2001 she married John BINKLEY, of Silver Springs, NV, who passed away shortly after their marriage. In 2003 she married Elmer “Ray” WIGGINTON of Las Vegas, NV. After Ray’s death in 2016, she moved to Missouri to be closer to her son, Derrill.


To order memorial trees or send flowers to the family in memory of Geneen Wigginton, please visit our flower store.