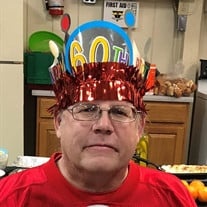 Garry Dean Hughes, 62, of Wellington passed away December 6, 2021at his home. A visitation will be Thursday, December 9, 2021 from 5:00 until 7:00 pm at Walker-Nadler-Fuller Funeral Home, Lexington. A funeral service will also be on Thursday at the funeral home at 7:00 pm. Inurnment will be at a later date. Memorials may be made to Honor Flight. Memories and condolences may be left at www.LedfordFamilyFH.com. Arrangements have been entrusted to Walker-Nadler-Fuller Funeral Home, 1720 South Street, Lexington, MO 64067, 660-259-2245.

Garry was born December 27, 1958 in Kansas City, Missouri to Roy and Evelyn (Fortner) Hughes. He graduated from East High School in 1977 and attended trade school for two years. He served in the United States Army for 11 years. He later worked as a serviceman for Jetz for 16 years. In 2002 he married Pamela (Schwindt) Hughes, she preceded him in death. Garry enjoyed watching Nascar and spending time with his family, especially his grandkids. He also loved the community of Wellington.


To order memorial trees or send flowers to the family in memory of Garry Dean Hughes, please visit our flower store.