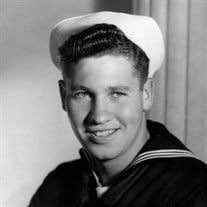 Born October 1, 1932, in Chapel Hill, he was the son of Fred Conley and Gayle E. Burrow Gann. He was a 1951 graduate of Odessa High School. On June 23, 1972, he married Bernice Schmidt in Odessa. He was employed in the pipeline and construction industries for 50-plus years. A Navy veteran, he served aboard the USS Titania in the Pacific Theatre from 1952-56. He earned the China Service Medal, National Defense Service Medal, Korean Service Medal, United Nations Service Medal, the Republic of Korea War Service Medal, a Republic of Korea Presidential Unit Citation and a Discharge Button.

Celebration of Life will be held at 1 p.m., Thursday, at Ralph O. Jones Funeral Home, 306 S. 2nd Street, Odessa, MO, 64076; burial in Odessa Cemetery. Visitation will be held from noon until service time at the funeral home. Memories of Feech and condolences for his family may be left at www.LedfordFamilyFH.com or on our Facebook Page. Pallbearers will be Pete Robinette, Donnie Stephenson, Adam Whited, Kyle Whited, Matt Kramer and Bill Luff. Family suggests memorials to Beacon of Hope Hospice, Oak Grove.


To order memorial trees or send flowers to the family in memory of Frederick Howard Gann, please visit our flower store.