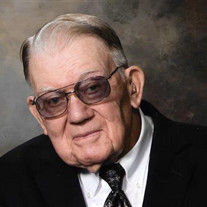 Fred August Thilking was born on April 16, 1933 in Independence, MO to Stanley Fred and Minnie Alvena Seevert Thilking. Fred married Grace Heman on February 15, 1953 in Levasy, MO. Fred was an Army Veteran, serving in the Korean War. Fred had worked at the Levasy Fertilizer Plant for 40+ years serving as manager for many years, he did this in addition to farming with his son. He was a member of the Ebenezer UCC and had served on the Chruch Council as well as being a member of the Family Fellowship, Choir and Men's Brotherhood

Fred is survived by his sons, Harold Thilking and wife Debbie, Napoleon, Dale Thilking and his wife, Kathy, Napoleon. His grandchildren, Shelly, Daniel, Clint, Cody and Caleb; great grandson, Hudson, and several nieces and nephews. Fred was preceded in death by his parents, his wife, Grace and his brother, Dr. George Thilking.


To order memorial trees or send flowers to the family in memory of Fred August Thilking, please visit our flower store.