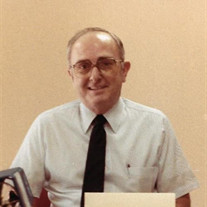 On Thursday, December 13, 2018, Floyd Trumbo departed a life of 85 years. He was born Floyd Duane Trumbo on November 9, 1933 in Winston, Missouri, to parents Harold Floyd Trumbo and Florence Wigger Trumbo. He had an older sister, Ruby, now deceased.
Floyd graduated from Winston High School and attended two years at Northwest Missouri University in Maryville. He left his studies to serve in the Army. He was stationed for two years in Hawaii. Floyd then completed his education at Central Missouri State, completing a Bachelor of Science Degree in Marketing.
Working in sales management for Amoco Oil for 15 years took Floyd and his family to live in several Midwestern cities. He also spent 15 years working for American Parts System, an auto parts distributor. He managed warehouses serving as many as fifty stores.
Floyd was a member of the Masonic Lodge and was a Shriner. He was very active in forming a new chapter of Rotary while residing in Cape Coral, Florida. While living in Houston, Texas he was an active and enthusiastic member of the "Hey Lollies" square dance club.
His wife of 60 years, Gwen Schenck Trumbo, of the home survives. They are the proud parents of two sons, Dr. Craig Trumbo, Fort Collins, Colorado and Pastor Keith Trumbo and wife Ann Thrash Trumbo of Cataula, Georgia. They have one grandson, Taylor Trumbo of Cataula, Georgia.
Services will be arranged at a later date. Memorial contribution may be made to the Shriner Burn Hospital, Galveston, Texas.


To order memorial trees or send flowers to the family in memory of Floyd Duane Trumbo, please visit our flower store.