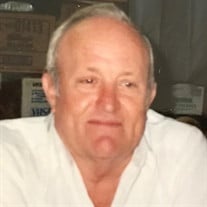 Ray was born on June 23, 1930, to Andrew Millard and Flora Ann (Nichols) Ledford in Harlan, Kentucky. He enlisted in the United States Air Force at age 16, serving for 20 years before retiring. While serving in the Military he was stationed overseas in Japan, Turkey, and Iceland. On November 18, 1950, Ray was united in marriage to Coralie Anne McMahon in Ridgeland, South Carolina. She survives of the home. In 1979 Ray along with his wife, Coralie and his son, Bruce, opened L&L Body Shop in Odessa, Missouri. He was a lifetime ordained deacon for Southern Baptist, served as a Sunday School Superintendent, Treasurer, and other positions in the church, and was currently a member of Calvary Baptist Church.

In addition to spending time with family and friends, Ray enjoyed hunting, fishing, camping, gardening, cars, carpentry, and spending time with his dog, Tracker. He was a hard-working person who at the age of 13 was a lumberjack for one of his first jobs. Ray was an excellent carpenter and metal worker. He was a loving father and grandfather who enjoyed his time with all of his family. Ray enjoyed a good laugh and hugs from all. His family was very important to him, and he always took good care of everyone. He will be deeply missed by the family.

Ray was preceded in death by his parents; his sisters, Melvina Ledford, Carmy Ledford, and Betty Ledford; and his brothers, Garnett Ledford, Enoch Ledford, Clifford Ledford, and Bobbie Ledford.


To order memorial trees or send flowers to the family in memory of Elza Raymond Ledford, please visit our flower store.