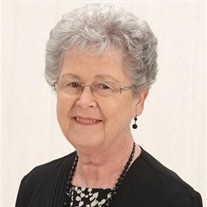 Mass of Christian Burial for Elizabeth Ann Starns, 79, formerly of Odessa, MO will be held on Saturday, June 16th, 2018, at 10:00 AM at St. George Catholic Church, 716 S. 3rd St., Odessa, Missouri. Visitation for Mrs. Starns will be held on Friday, June 15th, from 6:30 to 8:30 PM at the Ralph O. Jones Funeral Home, 306 S. 2nd St., Odessa, MO, 64076, 816-633-5524. The Holy Rosary will be prayed from 6:00 to 6:30 PM on Friday prior to visitation. Memorial gifts may be made to St. George Catholic Church or St. Elizabeth Ann Seton Catholic Church in Springfield, MO. Burial will be at the Odessa Cemetery. Mrs. Starns passed on to eternal life on Monday, June 11th in Springfield, MO.
Mrs. Starns was born on August 1, 1938, to Phillip Harold O’Malley and Anna Marie Pomatto in Scammon, KS. She and Max Johnson Starns were joined in the Sacrament of Holy Matrimony on September 17, 1960, in Weir, KS. They spent their early years of marriage in Pittsburg, Parsons, and Ellsworth, KS, until settling in Odessa, MO, in the fall of 1966. Mr. and Mrs. Starns became the owner of Starns Pharmacy in Odessa in 1967. Mrs. Starns worked full time in the pharmacy with her husband until they sold the business and retired in 1998.
While living in Odessa, Mrs. Starns was an active member of St. George Catholic Church serving in such capacities as CCD teacher, Alter Society member, Eucharistic Minister, and the Prime Timers. She was also involved in the Xi Epsilon Upsilon Chapter of Beta Sigma Phi, Kappa Phi Bridge Club, Bon Temps Bridge Club, Monday night card group, and Couples Bridge. She also enjoyed going to the theater with her husband.
Mrs. Starns relocated from Odessa to Springfield, MO, in 2016 to be closer to her family that she cherished and who adored and loved her. While in Springfield, she was an active member of St. Elizabeth Ann Seton Catholic Church where she made many friends and served as a Rite of Christian Initiation of Adults sponsor.
She is survived by three sons, Arthur Dean Starns and wife Anna of Rolla, MO; Anthony Harold Starns and wife Angela of Springfield, MO; and Gregory Kent Starns and wife Elizabeth of Nixa, MO; eight grandchildren, Kayla Marie, Phillip Anthony, Maria Elizabeth, Emma Marie, Gianna Catherine, Bridgette Anne, Kelly Elizabeth, and Max Gregory; four brothers, Phil O’Malley of Pittsburg, KS, Jim O’Malley and Charlie O’Malley of Scammon, KS, and Larry O’Malley of Independence, KS; and a sister, Mary Sue Schiefelbein of Pittsburg, KS; and many nieces and nephews. She was preceded in death by her husband, Max Starns, her parents, a sister, Rose Marie, and an infant brother, Joseph. Elizabeth was a loving and devoted wife, mother, grandmother, and friend. She will be very fondly remembered by all that were privileged to know her.


To order memorial trees or send flowers to the family in memory of Elizabeth Ann Starns, please visit our flower store.