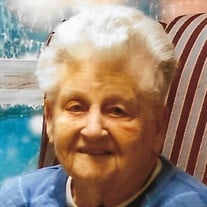 A funeral service will be held at 1:00 p.m., Tuesday, December 22, 2020 at the First Christian Church of Odessa, 224 W Dryden St, Odessa, MO, 64076. (Masks are required.) Interment will follow at the Green Lawn Cemetery, 83rd & Hillcrest Road, Kansas City, MO, 64138. In lieu of flowers, memorials are suggested to the First Christian Church of Odessa. Arrangements have been entrusted to Ralph O. Jones Funeral Home, 306 S. 2nd Street, Odessa, MO, 64076, 816-633-5524. Memories of Edna and condolences for her family may be left at www.LedfordFamilyFH.com or on our Facebook Page.

Edna was born on December 5, 1926 to Walter Lee and Elsie Mae (Matteer) New in Archie, MO. On February 16, 1948 she was united in marriage to Garland Wayne Hensley in Nevada, MO. After 55 years of marriage, he preceded her in death on January 18, 2003. Edna worked many jobs in her life. She worked as a waitress, at the school cafeteria at Raytown South, at Wilkinson’s Service Station, and Morgan’s Restaurant. Edna loved our country and served as an election judge for six decades.

In addition to her parents and husband, Edna was preceded in death by two brothers, Kenneth Erwin New and Howard Lee New; three sisters, Leone Marlow, Joann Kurtz, and Opal New in infancy; and a granddaughter, Karie Lynn Bowlin.


To order memorial trees or send flowers to the family in memory of Edna Mae Hensley, please visit our flower store.