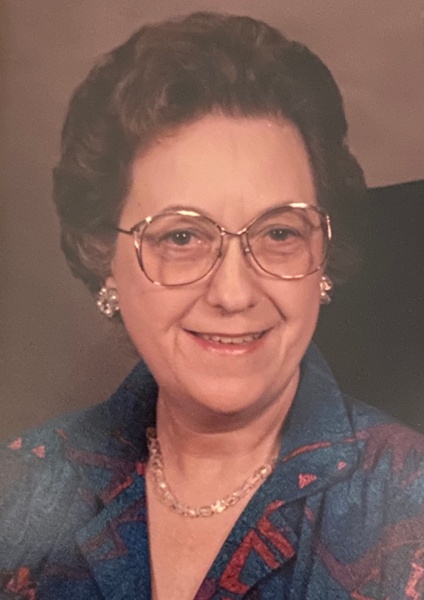 A funeral service will be held at 10:00 a.m. on Saturday, May 28th, 2022, at Ralph O. Jones Funeral Home, 306 S. 2nd Street, Odessa, MO, 64076, 816-633-5524. Visitation will be held one hour prior starting at 9:00 a.m. at the funeral home. Interment will follow at the Odessa Cemetery, Odessa, MO. Memorials can be made to Catholic Community Hospice. Memories of Doris and condolences for her family may be left at www.LedfordFamilyFH.com or our Facebook page.

Doris was born October 19, 1929, in Odessa, Missouri. She grew up in Odessa, graduating from Odessa High School in 1947. Quite remarkably, Doris became the Elementary School Teacher for the one-room rural schools in Odessa and later in Oak Grove, while studying Elementary Education at Central Missouri State University during the summers. She kept a life-long interest in her students, as well as her Odessa friends and families over the years.

After attending Kansas City Business College in 1952, Doris began her professional career at Cities Service Oil Company in Kansas City. She later transferred to Gulf Oil Company in Kansas City, and in 1967 was selected for the position of District Office Manager in Tulsa, Oklahoma, where she moved and continued her highly specialized managerial career in sales and marketing, and human resources. As the oil and gas industry changed, she transitioned back to Cities Service Oil Company (later Occidental Petroleum Company), where she served until her retirement in 1986. Throughout her professional career, was an active member in American Business Women's Association, serving tirelessly in all roles, especially as President, and was awarded Top Business Woman of ABWA. She was also a member of the Parkview Baptist Church in Tulsa.

Doris married James R. New April 10, 1976, in Tulsa, and they spent 34 happy years together until his death in 2010. Together they enjoyed family-oriented and adventurous travels, and shared many friendships that Doris maintained throughout the years. They deeply enjoyed their long membership in the Oaks Country club, which Doris maintained until moving back to Kansas City in 2018. Also, Doris loved her membership and friends in Tulsa Geological Geophysical Auxiliary, serving as president, as well as Daughters of the American Revolution and her Antiques and Collectibles group. She was also an avid gardener, developing lovely areas that the family enjoyed so much at their home. Doris was tirelessly devoted to her family genealogy, extending to Germany, and was referred to constantly for her advice, family lore, and historical information.

Doris was a beloved member of Jim's family - an enthusiastic stepmother and aunt, devoted grandmother to her 5 grandchildren and 3 great grandchildren, in addition to her loving cousins and relations (Mabry, Thoman, Thomas, and Reinhardt) throughout the area. Doris will be remembered with love for her kind thoughtfulness, and her interest and love for others.

We are especially thankful to the benevolent caregivers and health professionals from Catholic Community Hospice, and St. Anthony's Assisted Living and Memory Care in Kansas City.

To order memorial trees or send flowers to the family in memory of Doris New, please visit our flower store.