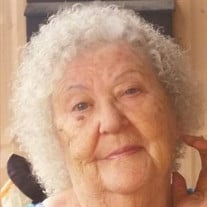 The family will host a Celebration of Life at a later date. In lieu of flowers, memorials are suggested to the Dora L. Newberry Account. Memories of Louise and condolences for her family may be left at www.LedfordFamilyFH.com or on our Facebook Page. Arrangements have been entrusted to the Ralph O. Jones Funeral Home, 306 S. 2nd St. Odessa, MO, 64076, 816-633-5524.

Louise was born on March 25, 1931 in Sparta, MO to Lewis and Dora (Winslow) McMillan. She graduated from Central High School in Springfield, MO. She later received her CNA Certification and worked as a nurse’s aide. She was united in marriage to Carl E. Adams in Springfield, MO. He preceded her in death. Louise was a member of the Frist Assembly of God in Odessa, MO. In addition to spending time with family and friends, Louise enjoyed Facebook, country music, especially Willie Nelson and collecting angels.

In addition to her parents and husband, Louise was preceded in death by a brother, Bud McMillan and two sisters, Mary Lawson and Clara Jarmello.


To order memorial trees or send flowers to the family in memory of Dora Louise Newberry, please visit our flower store.