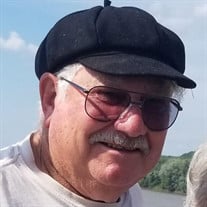 The family will host a Celebration of Life on Saturday, February 12, 2022, at 1:00 p.m. at Life Point Church, 707 S. 1st Street, Odessa, MO, 64076. Memorials are suggested to Eureka Baptist Church, 33497 Hwy FF, Richland, MO 65556. Memories of Donald and condolences for his family may be left at www.LedfordFamilyFH.com or on our Facebook Page. Arrangements have been entrusted to Ralph O. Jones Funeral Home, 306 South Second St., Odessa, MO 64076

Donald was born on April 15, 1937, to Loyal J. “Buster” and Ethel I. “Inez” (Bellington) Nickels in Richland, Missouri. Donald graduated from Stoutland High School in 1955. Donald was united in marriage to Linda Cauthon on December 6, 1965, in Odessa, MO. He served in the US Army, including a tour in Korea, and was honorably discharged in 1966. Donald worked as a Production Manager for Action Products for over 40 years.

Donald will be remembered for his gardening and giving his produce away to family, friends, and strangers. He enjoyed fishing on the Missouri River, baking, hunting, Bluegrass music, watching basketball, especially Colby’s games, watching Jeopardy with Nicole, mushroom hunting with Thomas and visiting with Brittany.


To order memorial trees or send flowers to the family in memory of Donald Wayne Nickels, please visit our flower store.