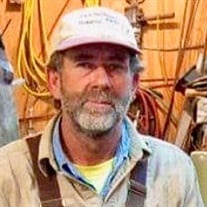 Donald “Donnie” Wesley Gash, Jr., 61, of Odessa, Missouri passed away June 23, 2021, at his home surrounded by those he loved most, after a lengthy battle with Alzheimer’s.

Donnie was born August 19, 1959, in Lexington, Missouri to Donald Wesley Gash Sr. and Shirley Ann (Carter) Gash. He graduated from Wellington-Napoleon High School with the class of 1979. He married Martha Collom on October 25, 1986, who preceded him in death April 29, 2007. Donnie worked as a heavy laborer for G&G Mechanical Contractors and was a member of the Heavy Laborers Union, Local 663, from which he retired in 2015. Aside from loving work like a fish loves water, Donnie loved to hunt, fish, and trap, and spoil his many grandchildren.


To order memorial trees or send flowers to the family in memory of Donald Wesley Gash Jr, please visit our flower store.