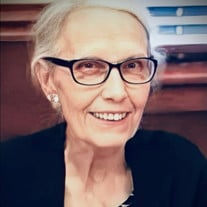 Dena Williams Lindhorst, beloved mother, grandmother, and great-grandmother, passed on May 24th, 2021 after 91 years of a full life. She started life on Christmas Eve in Arapahoe, Nebraska before moving to Indian Creek, Missouri. She grew up helping on the family dairy farm, surrounded by aunts, uncles and first cousins. She graduated from St. Stephen Catholic school and moved to St. Louis for some fun times rooming with two of her cousins. She returned to the Indian Creek area to work as a phone operator in Monroe City before marrying her Naval hero, Harry Lindhorst in 1949. They moved from Kirksville, Missouri to Lexington, Missouri in 1953 and made it their family home for the remainder of their years. She was a bookkeeper for Rush Drugs and worked her way up to manager at Connor Waggoner's clothing store, where she was a favorite of employees and customers.

Dena's life was centered around family, and she was the center of her family. She spent her life raising four children, Paula, Terrence, Mark, and Jay. She thrived on hosting family get togethers, keeping up with her large extended family, visiting her "doll-baby" great-grandchildren, being actively involved with the Catholic church, playing games of Scrabble, gabbing at McDonalds, and watching countless sporting matches and musicals.

Her family is her legacy to a life well lived. We will love her and honor her memory for the rest of our lives.

Visitation will be at Immaculate Conception Catholic Church in Lexington from 9:00 - 11:00 on Monday May 31st. The funeral mass will start at 11:00 and will be officiated by Father Deva Gudime and Dena's nephew, Father Mike Quinn. Lunch will be next door in Dibbins Hall immediately following the funeral mass.

The family requests memorials be sent to the Immaculate Conception Altar Society in Lexington or Holy Rosary School in Monroe City.
To order memorial trees or send flowers to the family in memory of Dena Williams Lindhorst, please visit our flower store.