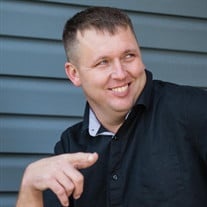 Curtis Wayne Lewis, 40, of Bates City, Missouri passed away on December 28, 2020 at home surrounded by family. Curtis was diagnosed in October of 2019 with Glioblastoma. He fought courageously every day for 14 months like the “OX” that he was. The amount of love and support Curtis and his family received was astounding and they are forever grateful.

Curtis was born on November 24, 1980 in Independence, MO to Dennis and Debbie (Smith) Lewis. He graduated with the Odessa High School class of 1999. After graduating high school, Curtis went to Kansas to harvest wheat where he knew he wanted to return one day for more adventure with equipment of his own. On September 2, 2012 he married Angela Dawn Morgan in Odessa, MO. Curtis was a lifelong farmer. He and Angela started their own business, KNL Harvesting. He was able to fulfill his dream of running the wheat harvest with his wife and children. He did custom harvesting, dozing, field tilling and terracing. Curtis loved his children with everything he had and hoped that one day they would want to follow in his footsteps and carry on his love for farming. It was always a vacation for him, not a “job”. When he was not working, which was not often, he enjoyed tinkering with his pulling tractor, eating ice cream with his family, dumping hedge apples at the four way in town, and always lending a hand whenever someone needed it. Curtis really didn’t know a stranger, always knew your name and he did it with a smile on his face.

Curtis was preceded in death by a daughter in infancy, Avery Ann, and a brother Bobby Joe Lewis


To order memorial trees or send flowers to the family in memory of Curtis Wayne Lewis, please visit our flower store.