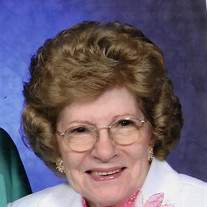 Funeral services will be held at 10:00 a.m., Saturday, December 30, 2017 at the Ralph O. Jones Funeral Home, 306 S. 2nd, Odessa, MO, 64076, 816-633-5524. Visitation will be held from 5:00 p.m. to 7:00 p.m., Friday, December 29, 2017 at the funeral home. Burial will be in the Salem U.C.C. Cemetery in McGirk, MO. In lieu of flowers, memorials are suggested to the Heisinger Bluffs Benevolent Fund, to help residents that need assistance or the Heisinger Bluffs Christ Care, to help employee’s that may need assistance. If you would like to mail a memorial, please mail to, Heisinger Bluffs, attention, Ron Freiburghaus, 1002 W. Main St., Jefferson City, MO 65109. Memories and condolences for the family may be left at www.ralphojones.com or on our Facebook Page.

She is survived by her son, Jeff Haldiman, Jefferson City, as well as a sister, Ollie McDaniel, Centertown, and a sister-in-law, Eileen Crawford, California.
Cora was preceded in death by her husband of 59 years, Roy, in May 2008.

Cora was born in Jefferson City to Ed and Cora McKenna in 1929 and was raised in Centertown along the Cole/Moniteau County line. It was there that her strong will and faith was developed having to overcome numerous health and family issues while growing up.
She and Roy were married in 1949 and he began a career in the grocery business while she spent 20 years as an administrative secretary in state government. When not working, the couple spent time traveling and working in their church, a pattern they would follow throughout their lives.
In 1970, the couple began a new segment of their lives. First, in March, they welcomed the birth of their only child, Jeff, and Cora left state government to become a full-time mom. A few months later, Roy accepted an offer to manage a grocery store in Odessa. This would lead the couple into ownership of that store and in later years part owners of two other stores. They were proud business owners, helping with numerous community activities and they worked until declining health forced them to retire and sell their business over 30 years later.
Cora was always known for her generosity. Not just in giving money or gifts, but also of her time. She also was known by two nicknames- "The Card Lady" and "The Church Lady." No matter where she lived, church was always important to Cora and if she wasn't doing something with her family or friends you could find her involved in some sort of church activity. While she was in good health, Cora made sure that friends and family were thought of on birthdays, anniversaries or other milestones in their life, if not with a gift, at least a card. She spent many days on the phone talking to friends and relatives, either by them reaching out to her or she reaching out to them. Even when she moved into Heisinger Bluffs in Jefferson City, she immediately adopted the chapel as her church and made sure she could get around to shake other worshipers hands and visit with them, even though she was having to use a walker or in a wheelchair.
Cora will be remembered as a person who led by example in how we should be willing to help our fellow humans, by thinking more of others than ourselves.


To order memorial trees or send flowers to the family in memory of Cora Darline Haldiman, please visit our flower store.