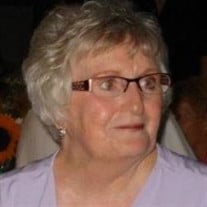 Connie Sue (See) Barker, 79, Warrensburg, died at home November 10, 2021, after an extended battle with multiple health issues.
Born April 15, 1942, in Kansas City, Missouri along with her twin brother Ronnie Virgil. She was the daughter of Virgil and Mary Wyram See.
In 1950, Connie and her family moved from Kansas City, Kansas, to a farm in Bates City, Missouri. Where she continued her elementary schooling at the Bates City School. She was baptized in the Bates City Methodist Church. Connie, her twin brother Ronnie and older brother Eddie were soon joined by sister Karen in 1952, and then surprisingly, a second set of twins, Jerry and Judy, in 1954. As the school districts consolidated, Connie attended schools in the Odessa School system, graduating from Odessa High School in 1961, where she was a cheerleader and named “Best Girl Mixer.”
After graduation, Connie worked as a nurse’s aide for Saint Joseph’s Hospital in Kansas City. She married Paul Thompson in 1963. Following her marriage to Don Barker, Sr. in 1969, Connie lived in Odessa and later lived in Windsor and Warrensburg. Both Paul Thompson and Don Barker, Sr. preceded her in death.
At one point, Connie attended Cosmetology School and worked as a hairstylist. She later worked at Central Missouri University (now University of Central Missouri) for many years in Food Service, managing kitchens for several residence halls, and the Fraternity Complex. Whatever job or task Connie assumed, she gave it her all. She was recognized for her work ethic, dedication, collegiality, and loyalty. But primarily she loved the roles of homemaker, wife, mother, daughter, sister, aunt and later grandmother. She loved her family and many friends unconditionally. Truly, to know Connie was to love Connie.
Connie was preceded in death by her twin brother Ronnie in 2004, by her parents, her grandparents, and most recently by her nephew Ronnie V. See, Jr. in 2014.
Survivors include her two children and their spouses, Kelly and John Brooks, Warrensburg, and Don and Stacey Barker, Jr., Higginsville; three grandchildren, Elizabeth Gentry, David Brooks and wife Lisa, and Kayla Barker; and one great-grandson Wyatt Gentry; two sisters and spouses, Karen and Frank Bannister, Judy and John “Moose” Helm; brothers Ed See and Jerald See; cousin Monalee Inzer, and numerous and loving nephews and nieces and friends.
A Celebration of Life will be held at 12:00 p.m., Saturday, November 20, 2021, at Ralph O. Jones Funeral Home, 306 S. 2nd St., Odessa, Mo, 64076, 816-633-5524. The family will receive friends from 11 a.m. to 12 p.m., on Saturday, November 20, 2021, at the funeral home. Brother-in-law Frank Bannister will officiate. Nieces Brenna Bannister and Brooke Markey will provide the music. Immediately following, Connie will be buried at the Odessa Cemetery. Memorial Contributions are suggested to the Shriner’s Hospital for Children.


To order memorial trees or send flowers to the family in memory of Connie Sue (See) Barker, please visit our flower store.