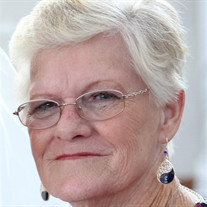 Clarissa (Hill) Bebout, 73, of Bates City, Missouri, formerly of Odessa, Missouri passed away on Monday, September 16, 2019 at her home.

The family will host a Celebration of Life at 12:00 p.m., on Thursday, September 19, 2019 at the Calvary Baptist Church, 7995 Outer Rd., Odessa, MO. 64076. Arrangements have been entrusted to Ralph O. Jones Funeral Home, 306 S. 2nd Street, Odessa, MO, 64076, 816-633-5524. Memorials are suggested to the three great-grandchildren, in care of Denise Best. Memories of Clarissa and condolences for her family may be left at www.LedfordFamilyFH.com or on our Facebook Page.

Clarissa was born on August 7, 1946 in Los Angeles, CA to Carl and Evelyn (Swatzenberg) Clark. She graduated from Raytown High School in Raytown, MO in 1964. Clarissa was a homemaker, but later on in life started working as a cook at the Odessa Senior Center. She was a member of the Calvary Baptist Church of Odessa. In addition to spending time with family and friends, Clarissa enjoyed bingo, crocheting, crafts and was an avid trout fisherwoman.


To order memorial trees or send flowers to the family in memory of Clarissa Bebout, please visit our flower store.