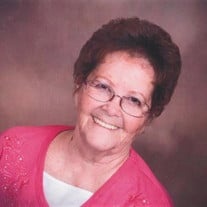 Charlotte was born on June 1, 1939 in Odessa, MO to Hershel and Naomi Caroline (Begemann) Dowell. She graduated in 1957 from Odessa High School. On September 8, 1957 she married Lawrence "Buck" Norris Wilson in Odessa. He preceded her in death on May 9, 2006. Charlotte worked at the office of Dr. Boydston, Ice Cream Factory, the Junior High Cafeteria and she retired after 20 plus years from Harmon Electronics in 2008. She was a member of the First Baptist Church and was very active in many groups within the church. Charlotte was also a member of the VFW Post 5675 Ladies Auxiliary. In addition to spending time with family and friends, Charlotte enjoyed playing bridge, Friday night card games, bingo and her yearly trips with her card playing buddies.

In addition to her parents and husband, Charlotte was preceded in death by a son Phillip Wilson.


To order memorial trees or send flowers to the family in memory of Charlotte Ann Wilson, please visit our flower store.