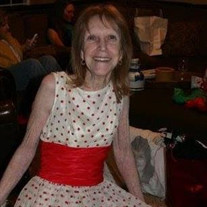 Carol was born on January 20, 1940 in Mayview, MO to Calvin and Essie (Boone) Matthews. After graduating high school she then continued her education at CMSU receiving her Master’s Degree and taught in the Grain Valley School District for over 30 years before retiring. On November 24, 1969 Carol was united in marriage to James R. Allen (BA) in Miami, OK. He preceded her in death in 2000. Carol was a member of the Retired Teachers Association and the First Baptist Church of Odessa. In addition to spending time with friends and family, Carol was an avid Chiefs fan. In regards for her love of football, the family would like to extend the invitation of wearing Chief apparel to the service.

In addition to her parents and husband, Carol was preceded in death by a great grand-daughter, Analynne Mae Arbogast.


To order memorial trees or send flowers to the family in memory of Carol Jean Allen, please visit our flower store.