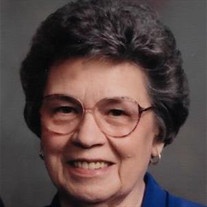 Carmen was born July 25, 1925, south of Higginsville, the daughter of Cameron C. and Mildred (Davis) Morrison. They settled in Odessa, where the family operated Morrison Truck & Tractor for three decades until 1967. Carmen married Richard Lee “Dick” Crews on Oct. 6, 1946, at the First Christian Church in Odessa, where they were lifelong members. He preceded her in death on Nov. 30, 2015.

Carmen and Dick were 1943 graduates of Odessa High School. She worked for the Bank of Odessa in bookkeeping and accounting for about 25 years, retiring in 1990. Carmen and Dick were members of several bridge groups through the years, and Carmen and her close-knit friends, “The Girls,” often played card games late into the night. She loved to cook, bake casseroles, cookies and cakes, and host her family and friends. Reading and sewing were among her pastimes, and examples of her beautiful and intricate cross-stitching are treasured by her family.

She also was preceded in death by her daughter, Karen Jayne (Crews) Murry in 1983; her parents; her brother Franklin Morrison, and her sister Sarah Lee (Morrison) Crabtree.

Donations honoring Carmen may be made to the Odessa Area Historical Society & Museum, P.O. Box 324, Odessa, MO 64076. The family wishes to thank the compassionate and caring staff of Benton House of Blue Springs, which was Carmen’s home since 2015.


To order memorial trees or send flowers to the family in memory of Carmen Gertrude (Morrison) Crews, please visit our flower store.