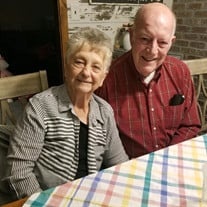 Carl was born on April 30, 1938, in Kansas City, MO to Buford P. Buck and Irene M. Buck (Alcox). He grew up in Kansas City and joined the Boy Scouts, attaining the rank of Eagle Scout. After Carl graduated from East High School in KC, MO, he joined the United States Army on June 16, 1957, serving until honorably discharged on December 15, 1957. Carl met his beautiful wife, Ellen (Richardson), while working at BMA insurance. She survives of the home. They were united in marriage on September 6, 1959. Carl joined the Kansas City MO police department for 5 years before taking a position at GM Leeds Plant in Kansas City, MO as a security guard, which he fulfilled for 28 plus years. He was one of the last employees at the plant when they shut the doors. Carl and Ellen bought a home and 40 acres in Odessa in 1969 where they raised their family and enjoyed country life. Carl never met a stranger and had a heart of gold to help those in need—now mind you, he did have his definite opinions and wasn’t shy about letting you know. Carl enjoyed working on projects, lawnmowers, small engines, and loved spending time with family.

Carl was preceded in death by his parents; a sister, Ruth Buck Cook; and a brother, John Buck.


To order memorial trees or send flowers to the family in memory of Carl H Buck, please visit our flower store.