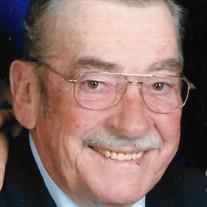 Loren was born on October 10, 1937 in Mayview, MO to David Elmo and Opal (Bayless) Couch. He was a 1955 Odessa High School graduate. Loren was drafted into the United States Army on September 28, 1960, retiring as Sergeant Major (E9) Calvin Loren Couch after 37 years of service on October 10, 1997. On January 18, 1963 he was united in marriage to Bonnie Sue (Axsom) in Odessa, MO. Loren worked as a Pipefitter for 45 years, retiring from Bendix Corp., ARMCO Steel and GST Steel. He was a member of the First Baptist Church of Odessa, Pipefitters Local Union no. 533, Steelworkers Local no. 13, the American Legion Post 286, and lifetime member of both the Knights of Phythias Olive Lodge no. 97 and American Veterans Post 100. Loren served on the Odessa Board of Education for nine years.

Loren was preceded in death by his parents; a sister, Alene Emanuel; and a brother, Lloyd Couch.


To order memorial trees or send flowers to the family in memory of Calvin Loren Couch, please visit our flower store.