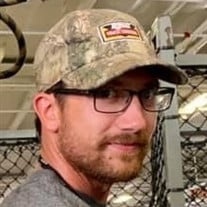 Bryan Lee Hunt, 30 of Osawatomie, Kansas formerly of Odessa, Missouri passed away on Sunday, August 25, 2019 as the result of a motorcycle accident.

Bryan was born on February 1, 1989 in Kansas City, MO to Larry and Edie (Morrison) Hunt. He graduated in 2007 from Odessa High School in Odessa, MO. Bryan was currently working for Rush Truck Center in Olathe, Kansas as a Diesel Technician and formerly worked for Inland Truck. In addition to spending time with his family and friends, Bryan enjoyed traveling, fishing, float trips and being outdoors.

Survivors include his mother and stepfather, Edie Morrison and Dean Gadelman of Odessa, MO; two children, Peyton Conner and Chance Hunt of Edwardsville,

Bryan was preceded in death by his father Larry Hunt.
To order memorial trees or send flowers to the family in memory of Bryan Lee Hunt, please visit our flower store.