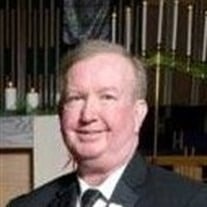 Bruce Allen Minter passed away on February 7, 2021, at KU Medical Center. He had been a patient of KU Oncology for the past several months.  He was born May 23, 1952 in Independence, Missouri, the son of Darl and Myrtle Jarrett Minter. He married Patt Peoples on May 18, 1985.
Bruce attended the Wellington Public Schools for elementary education. He graduated from Wentworth Military Academy High School, 1970 and Junior College, 1972. He studied a year at MU, and then completed his undergraduate degree in finance at SMSU. He received his Juris Doctorate from UMKC Law School.
For those who knew Bruce, he lived life large. He loved his friends dearly. If you were his friend, you knew he had your back.
Bruce is survived by his wife Patt, daughter Karen and her husband Dan Greig, son Corey Peoples Minter and his wife Machelle, and grandchildren Ashlyn and Emma Perry, Keeley Minter, and Samantha Greig. He is also survived by his brothers, Ron and Jim Minter.  His “Pig Family” mourn his loss as they loved him dearly.
A memorial will be held at The Spotted Pig in Lexington, Missouri, on Sunday, February 14 at 1:00 pm. A Muster for Wentworth "Old Boys" will be organized when the weather is more suitable. Those wishing to remember Bruce may contribute to the American Cancer Society.
Bruce was able to save two person’s sight by the donation of his corneas.  Please consider being an organ donor.


To order memorial trees or send flowers to the family in memory of Bruce Allen Minter, please visit our flower store.