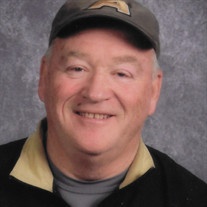 Bruce was born on January 14, 1947 in Waterloo, IA to Albert Ray and Emma (Shipley) Gross. He graduated in 1965 from La Porte City High School in La Porte City, IA. On April 8, 1967 he married Cynthia Rae (Richards) Gross in La Porte City. Bruce retired in 1995 from John Deere in Waterloo, IA as a Machinist after 30 years of service. He also owned and operated Hawkeye Spray Service from 1977 until selling the family business to his son Mark in 2002. Bruce was a member of the Crossroads Community Church of the Nazarene in Waterloo. In 2015 Bruce and Cindy moved to Odessa, MO and joined the First Baptist Church. He was a member of the UAW local 838 in Waterloo. In addition to spending time with his family and friends, Bruce loved his grandchildren, sports, the Iowa Hawkeyes, his chocolate lab Buster and he was a proud father and grandfather of three Army Veterans.

In addition to his parents, Bruce was preceded in death by a granddaughter, DeeAnn Gross; and six half-siblings, Forrest, John, Dixie, Betty, Donna and Delores.


To order memorial trees or send flowers to the family in memory of Bruce Nathan Gross, please visit our flower store.