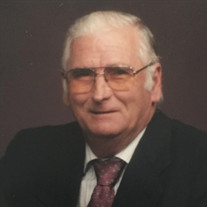 Bobby was born on February 15, 1936 in Kansas City, MO to Benjamin Harrison and Susie (Huckstep) Bowman. He and his sister Betty were the first set of twins born at St. Luke’s Hospital in Kansas City, MO. He married Margaret Claudene (McNulty) Bowman on October 16, 1957 in Sedalia, MO. She preceded him in death on October 12, 2014. Bobby retired from General Motors Fairfax Plant in Kansas City, KS after 29 years of service. He was a member of the Church of Christ in Odessa, MO and the UAW Local 31 in Kansas City, KS. In addition to spending time with his family and friends, Bobby enjoyed hunting, traveling, and tinkering around his farm. He was known for taking pride in the accomplishments of others by clipping articles about friends and family from the newspaper.


To order memorial trees or send flowers to the family in memory of Bobby dean Bowman Sr, please visit our flower store.