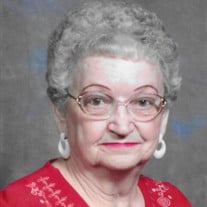 Billie Jo Eagle, 86, of Odessa passed away August 26, 2021 at North Kansas City Hospital. Visitation will be Wednesday, September 1, 2021 from 1:30 until 2:30 pm at the Ralph O. Jones Funeral Home. A funeral service will also be on Wednesday at the funeral home at 2:30pm. Burial will be in the Odessa Cemetery. Memorials may be made to Northcare Hospice House. Memories and condolences may be left at www.LedfordFamilyFH.com. Arrangements have been entrusted to Ralph O. Jones Funeral Home, 306 South Second Street, Odessa, MO 64076, 816-633-5524.

Billie was born October 14, 1934 in Little Rock, Arkansas to William and Jeanetta Mae (Parks) Watkins. She married Wayne Lee Eagle December 3, 1955. He preceded her in death in 2008. She worked as a housekeeper for Blue Springs Care Center and enjoyed gardening and flowers.


To order memorial trees or send flowers to the family in memory of Billie Jo Eagle, please visit our flower store.