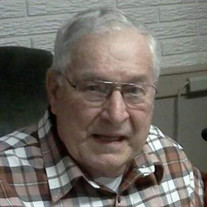 Bill was born on October 6, 1934 in Warrensburg, MO to Clay Wells and Thelma Cathleen (Elkins) Ireland. He graduated in 1952 from Deepwater High School in Deepwater, MO. Bill enlisted in the United States Army and served in the Korean War. He received the National Defense Service Medal, Good Conduct Medal, United Nations Service Medal and the Korean Service Medal. He was Honorably Discharged on June 8, 1955. On November 19, 1955 he married Carol Sue (Rupp) Ireland in Blue Springs, MO. She survives of the home. When Bill returned from the Army he started working for the Leeds Plant in Kansas City, MO then he worked construction helping build the Commerce Towers in downtown Kansas City. After completion he worked for Ford Motor Company and after 30 years of service he retired as an Owner/Operator over the road Truck Driver. Bill and Carol farmed, raising and breeding horses, cattle and hogs. Bill held a private pilots license, owned a Luscombe 240 airplane and when he was able loved flying. He was a member of the Aircraft Owner Pilots Association, V.F.W. Post 5675, American Quarter Horse Association, American Cutting Horse Association and a former Odessa Jaycee. In addition to spending time with family and friends, Bill enjoyed racing motorcycles, go karts and woodworking.

Bill was preceded in death by his parents.


To order memorial trees or send flowers to the family in memory of Bill D. Ireland, please visit our flower store.