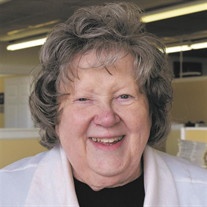 Born January 24, 1933, in Brunswick, she was the daughter and only child of Lester and Madeline Blunt Simpson.
She was a 1950 graduate of Holden High School and a 1954 graduate of the University of Missouri School of Journalism, Columbia.
A third generation journalist, she was owner/publisher of the Odessan from 1960-2018. She also founded Focus on Oak Grove in 1995 and was owner/publisher.

She was a past president and Paul Harris fellow of the Odessa Rotary Club. She was past president of the Missouri Press Association and the Missouri Press Foundation. She received an Honor Medal from the University of Missouri School of Journalism and a Distinguished Alumni Award from the University of Missouri and was a recipient of the National Newspaper Association Emma C. McKinney Award. She was inducted into the Missouri Press Hall of Fame and during the 2012-2013 school year, she was inducted into the Odessa R-7 Public Education Foundation Hall of Fame. She also was a past member of numerous alumni committees and organizations at MU and was Puddle Jumper Days parade marshal in 2011. Betty was a member and elder of New Horizon Presbyterian Church and taught Sunday school for many years.


To order memorial trees or send flowers to the family in memory of Betty S Spaar, please visit our flower store.