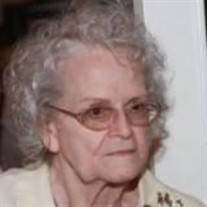 Betty was born on February 24, 1937, in Fort Sumner, New Mexico to Aylor and Irma (Mason) Duncan. She was a 1955 graduate of Lee’s Summit High School. On October 29, 1955, she was united in marriage to Glenn Delbert Eggert in Lee’s Summit, MO. They moved to San Francisco, CA where Glenn was stationed in the Army. After discharge, they returned to the family farm in Odessa where they stayed the remainder of their lives. Betty was an avid reader, loved her family, spent her life as a homemaker, and raised five children.

Glenn preceded her in death one year and one day earlier on June 1, 2020. Betty was also preceded in death by her parents; a brother, James Duncan; a sister, Annabelle Duncan; and a great granddaughter, Cora Padilla.


To order memorial trees or send flowers to the family in memory of Betty Lou Eggert, please visit our flower store.