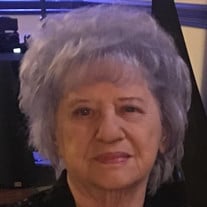 Betty was born on September 23, 1930 to Aaron and Iva (Graham) Chamblin in Cowgill, MO. After graduating from Liberty High School in 1948, she received her degree in Stenography from William Jewell College in Liberty, MO. On September 5, 1962 she was united in marriage to Dorsey “Don” Cross in Miami, OK. He preceded her in death. After Betty and Don were united in marriage they traveled with the Airforce and Betty was a homemaker taking care of the family. She attended the First Baptist Church of Odessa and was a member and past president of the Maryvale High School Booster Club. In addition to spending time with family and friends, Betty was an avid reader and cherished her dog, Bebe.

Survivors include a son Scott Cross and significant other, Vicki of Phoenix, AZ; a daughter Lesley Asher and husband, Tim of Odessa, MO; three grandchildren, Josiah, Isaiah, and Moriah Asher of Odessa, MO; a sister in law, Carolyn Webb and husband, Roger of Gladstone, MO; a nephew, Tim Chamblin and wife, Melissa of Lake Lotawana, MO; three nieces, Stephanie Chamblin, Jennifer Chamblin, and Cindy O’Day; and many relatives and friends.

In addition to her parents and husband, Betty was preceded in death by two brothers, Kenneth and Graham Chamblin; and a sister, Pauline Hesemann.


To order memorial trees or send flowers to the family in memory of Betty Lou Cross, please visit our flower store.