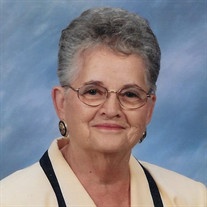 Betty Jane Campbell 93, passed away on Sunday June 16th at Meyer Care Center, Higginsville, MO.
Visitation will be held from 6:00 p.m. to 8:00 p.m., Friday, June 21, 2019 at the First Baptist Church, 100 W. Hwy OO, Odessa, MO, 64076. A funeral service will be held at 1:00 p.m., Saturday, June 22, 2019 at the church. Burial will be in the Odessa Cemetery. Memorials are suggested to the First Baptist Church or Mt. Tabor United Methodist Church. Memories of Betty and condolences for her family may be left at www.LedfordFamilyFH.com or on our Facebook Page. Arrangements have been entrusted to the Ralph O. Jones Funeral Home, 306 S. 2nd St., Odessa, MO, 64076, 816-633-5524.
Betty was born October 30, 1925 in Butler, MO to Estel and Stella Bedwell. She attended school there until her freshman year when she was forced to leave school to become the primary caregiver for her dying mother. Following the death of her mother Betty's dad brought her to Odessa to run the Nu-Wa-Inn Restaurant which he had recently purchased. Betty has been an Odessa resident since that time.
It was at the Nu-Wa-Inn that a handsome Army soldier caught Betty' eye. That soldier chewed a lot of gum and since it was during WWII it was a little hard to come by. But Betty supplied him with packages of gum from the Nu-Wa-INN. This same handsome soldier (Kenneth Campbell) became Betty's husband on June 6, 1949 after 3 years of courtship. That blessed union lasted 59 years until Ken's passing. Betty later waitressed at Mack's Cafe in Odessa. But, after the birth of their first child she became a stay at home mom. She later became a cake baker/decorator and lovingly prepared and decorated cakes for many weddings, parties, and birthdays to supplement the household income. She sold Avon, managed the original Morgan’s Café and worked at a couple of garment factories, Walmart, and Whistle Stop. She made friends for life at each of those endeavors and many of them are here today
Betty and Kenneth were parents of 5 children: Kenny or (Porky) as he was often called, daughter Janet Warren (that's me), Dennis, Danny, and Kevin.
Betty has often been called the best cook in Odessa. People still comment about the pies, cobblers, cakes, cinnamon rolls, and fried chicken that she used to make. My friends still remember and comment about the scrumptious hamburgers she would make for our bunking parties.
Betty was also an excellent seamstress. She made shirts for her boys and my dad and I never had a store bought outfit until I was 12. She made my dresses, slips, pantaloons, prom dresses, and even my bridesmaid’s dresses. She became an excellent quilt maker and all of her children and grandchildren have one or more of them to cherish. She made a list of all of those quilts that she made and gave to others.. They totaled 120.
I recall on a vacation to West Virginia in the early 50's that my brother Kenny kept punching me in the arm with his knuckles extended, Of course, I yelled each time. I was SO frightened already that we would fall off the mountains. My dad pulled the car off on the shoulder and my mom got out. She stood on the edge of the road and looked back at Kenny and I and said, “If you guys don't stop it, I'm going to jump off this mountain.” I immediately cried, “Noooo, Momma, No.” Kenny said, “Ah, she ain't gonna do it” and started to laugh. I can guarantee you that I NEVER yelled the rest of the trip as he continued to hit me.
All of us children remember mom screaming during the night. She had many demons to fight from her childhood. Our Dad would just say, “Go back to sleep. She's just dreaming.” She continued that nightly screaming for most of her days.
Betty was always such a giving person. I remember when Kenny and I were small how she temporarily cared for a girl from the State School in Higginsville. Mom would make all of her clothes and the girl got to come stay some weekends with us for several years. Betty was always one of the first neighbors or friends to show up with homemade bread, a casserole or a pie when someone passed away or was ill. That was just one of her Christian ways that continued throughout her life and made her to endeared to so many.
I can truly say that despite much turmoil in her childhood years her strong Christian Faith, caring, giving, kindness to all, was evident throughout her entire life. Even trying to assist an elderly lady at the nursing home when she herself could not walk without a walker. Those are the things that we will all remember.
Betty was a member of the Mt Tabor Methodist Church for over 60 years and then later moved her membership to the First Baptist Church in Odessa which she attended regularly until she had to move to assisted living.
Betty was preceded in death by her husband Kenneth in 2008, her oldest son, Kenny in 1983, and her son Danny in 2007, a grandson Kenneth Scott Campbell, her parents, and two brothers Leon Bedwell and Alvin Bedwell, and step-mother Jesse Bedwell.
She is survived by children Janet Bowlin- Warren and husband Cuba of Warsaw, MO, Dennis Campbell of Kansas City, Kevin Campbell and wife Susie of Odessa, Daughter in law Glenda Campbell of Columbia, MO, 9 grandchildren and 8 great grandchildren, and one brother; Carl Bedwell of Rocklin, CA.


To order memorial trees or send flowers to the family in memory of Betty Jane Campbell, please visit our flower store.