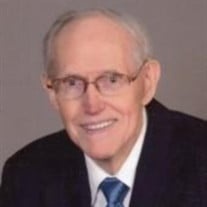 Arthur was born on May 28, 1931, in Odessa, Missouri, to Samuel and Blanche Emanuel. Art spent his early years on the family farm where he would ride a horse to school during heavy rains. Later, he and his family moved into town where Art worked in the drug store as a soda jerk. In 1949, Art graduated from Odessa High School. One year later, he met the love of his life, Vaudene Frances Moores. Art and Vaudene married on March 16, 1951, and he would remain completely devoted to her for the rest of his life.

Art found work at the Town & Country Shoe Factory in Odessa, where he and Vaudene continued to reside. In the middle of his time at the factory, Art was drafted to serve his country as part of the Armed Forces during the Korean War. After serving in New Jersey for eighteen months, he returned home, and he and Vaudene had their two sons.

After graduating with a business degree from Central Missouri State College, Art found himself working in the mailroom at the U.S. Customs Office in Kansas City, Missouri. Three years later, in 1963, Art received a phone call that would move the small farm boy to the big city. He was offered a job as a U.S. Customs Inspector and given twenty-four hours to decide whether to take it. He and Vaudene ultimately decided that St. Louis sounded nice. This move paid off when Art was promoted ten years later to Chief Customs Inspector for the St. Louis region. He held this job for eighteen years and was immensely proud of the work he did for his new city.

After retiring from the position of Chief Inspector, Art worked in the produce department at the Kirkwood Schnucks Supermarket, a job he held for ten years until his second retirement in 1997. He continued to maintain active involvement in the congregation of Webster Hills United Methodist Church, where he was a faithful member for 58 years.

Art’s life was marked not by the things he did but instead by the people he loved. His two sons lived near him, and he enjoyed having grandkids pop by his home where they could always find a jar of M&Ms and a chocolate bar waiting for them. He cared for his beloved Vaudene until her death, and losing her served only to deepen his affection for her and the 66 years they spent together.

Arthur was preceded in death by his parents; sister: Mary Margaret; two brothers: Robert and Jackie; two children: Linn Dean and Pamela Jean; and one granddaughter: Ashley. He is survived by his two sons: Duane (Karen) and David (Tammie); and five grandchildren: Christopher (Meredith), Sarah, Rachel (Benjamin) Emanuel-Prude, Joshua, and Jeremiah (Kati); and many cousins, nieces, and nephews.

A visitation will be held at Bopp Chapel in Kirkwood Thursday, April 22 from 5-7 pm.


To order memorial trees or send flowers to the family in memory of Arthur Samuel Emanuel, please visit our flower store.