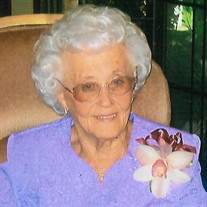 Anna Jane (Campbell) Stubblefield Couch, 85 of Odessa, Missouri passed away on Saturday, May 5, 2018 at the St. Mary’s Manor in Blue Springs, MO.

Anna was born on May 19, 1932 in Bates City, MO to Aubrey and Viola Grace (Day) Campbell. She graduated in 1949 from Odessa High School in Odessa, MO. In addition to farming, Anna worked as a secretary for the high school and insurance offices, then for the shoe factory, and retired from Lake City Ammunitions in Independence, MO. She married Jack Stubblefield on December 26, 1949 in Odessa. He preceded her in death in February of 1995. On September 2, 1996 she married Lloyd “Elmo” Couch in Odessa. He preceded her in death in November of 2008. Anna was Baptist by faith. She was a member of the Shaw Club. In addition to spending time with her family and friends, Anna enjoyed sewing, gardening, the outdoors, traveling to Branson and attending country music shows.

In addition to her parents, Anna was precede in death by her husbands.


To order memorial trees or send flowers to the family in memory of Anna Jane Stubblefield Couch, please visit our flower store.