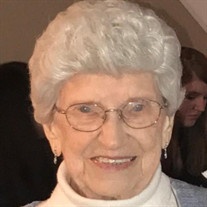 Anna Louise (Tilly) Ahmann, 96, of Wellington, passed away March 29, 2020 at The Parkway Senior Living in Blue Springs. Due to restrictions, a private graveside service will be Wednesday, April 1, 2020 at St. Luke Cemetery, Wellington. A public Celebration of Life will be hosted at a later date. Anna will lie in state Wednesday, April 1, 2020 from 9:00 am until noon at the funeral Home. Friends may call during that time. In lieu of flowers, memorials may be made to St. Luke Church or St. Luke Women’s Fellowship. Memories and condolences may be left at www.LedfordFamilyFH.com. Arrangements have been entrusted to the Ralph O. Jones Funeral Home, 306 South Second Street, Odessa, MO 64076, 816-633-5524.

Anna was born May 28, 1923 in Wellington to August and Bertha (Grumke) Tilly. She graduated from Wellington High School in 1941. On May 12, 1946 she married Edgar Ahmann in Wellington. Her husband Edgar started a farm west of her home place where she was born. They fixed up the old house with no plumbing and lived there for 6 Years. They moved to her home place in 1953. They then built a home on land they had bought in 1980. Edgar passed on March 9, 1994 and she continued to live there until 2002. She bought a house in Wellington and lived there until 2019 when she moved to Parkway Senior Living. Her home place became a Grumke Tilly Ahmann Century Farm in 2017. Her grandson Jeremy Ahmann and family currently reside and continue to carry the family farming tradition that was so important to her and Edgar. Anna retired from H&R Block, Independence, after 38 years of service. She was a member of St. Luke Evangelical Free Church and was involved in Women’s Fellowship, the church choir, Crusaders Sunday School Class and she taught Sunday School. She enjoyed quilting, sewing, cross stitching, crocheting, gardening, cooking, playing cards and games (Sequence and Uno) and square dancing.


To order memorial trees or send flowers to the family in memory of Anna Louise Ahmann, please visit our flower store.